Skip to content
Previous Next
Submission for Peer Review 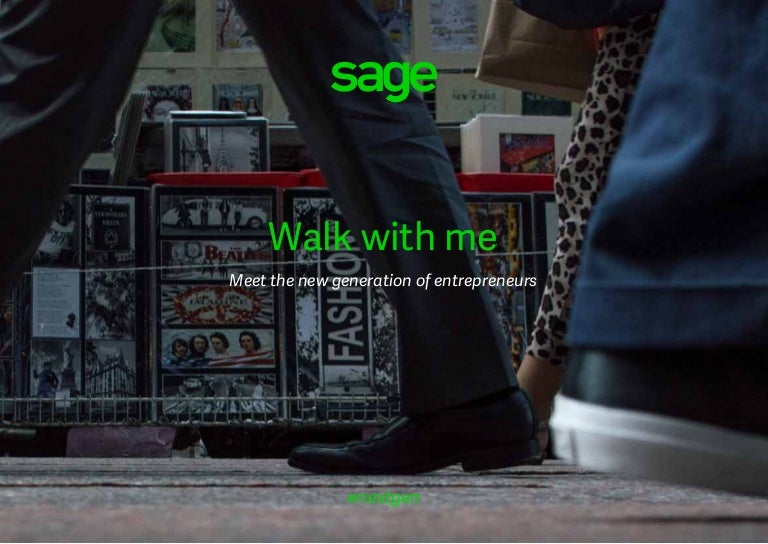 Knowing that millennial entrepreneurs are tired of clichéd advice from self-proclaimed gurus and companies that are telling them to just believe in themselves and they’ll succeed, combined with an understanding that millennials want hear from people who have survived and thrived in the trenches of modern business without any corporate sugar-coating, Sage created a report titled, Walk with Me, to celebrate millennial pioneers.

Sage used research to compile a visual report which includes infographics, identifies the new generation of entrepreneurs, detailing their needs, desires and the challenges they face. The research also uncovered five dominant personas among millennial entrepreneurs:

The overall strategy was a content-led approach that plots the journey of a business, using a human-centric message. This was blended with insight, experience and vision to create a blueprint for future best practice. We aimed to deliver tangible outcomes, using entrepreneurs who have ‘been there, done that’ to offer advice, alongside Sage.

Why Sage did it?

Sage wanted to celebrate millennial pioneers and super-fast growth businesses, and show how technology can increase the cultural pull of a business instead of being seen to jeopardise it. Using its own history of business growth, Sage wants to show that it can relate to the millennial audience and despite being a historic business, it still knows how the next generation of business leaders think and what they need.

The key objectives were to:

In doing this, Sage also wanted to ensure there was a focus on super-fast growth businesses to align Sage with innovation, speed and modern thinking.

How Sage did it?

Sage completed research based on 7,400 online surveys with entrepreneurs aged between 18 and 34, in 16 countries, during April 2016. From this research, the visual report, Walk with Me, was created.

The day before launch, we sent teaser content to media to amplify the report. We produced hologram videos featuring the five personas, which journalists were able to view through an iPhone thanks to the Perspex pyramid sent in a branded Sage box.

Sage also developed a chatbot which summarised the report’s findings in an interactive and innovative manner. This allowed Sage to promote its own accountancy bot, Pegg, to enforce Sage’s commitment to innovation in its field.

Sage wanted to demonstrate their knowledge of the millennial audience, while producing global content, coverage and social with creative ideas.

Global content and social creative delivery meant that 86 global pieces of coverage were secured, including Bloomberg, CNBC, Business Insider UK, Management Today, Forbes and BBC Online. Interviews were led by Kriti Sharma, and Kriti has now secured slots at Mobile World Congress in Lisbon and Harvard Business Review around the research and Pegg.

Globally, Sage has seen a 26% increase in 25-34 year olds signing up to Pegg since the report launched.

Identifying the five dominant personas allowed us to target millennials, enticing them to engage with the report to find out which persona they are. This led to students terming Sage as ‘cool’ at Sage’s own Summit event in Chicago, July 2016. A far cry from the terms usually associated with a company like Sage which has been around for over 30 years.

The human-centric approach meant that we spoke to our target audience the way they wanted to be spoken to. Presenting the findings of the research in a straightforward, visual style helped us avoid the sugar-coating millennials hate, while the content was interesting enough for them to forgive the corporate name attached to it.

The company has seen a regular stream of events in millennial meet-ups and events, with Sage representatives, since the report.

In just Q1, the report was used to generate 474 leads to the business. The success has lead Sage to begin looking into repurposing the report on social media in the form of infographics for various markets.

The key challenge of the project was enticing millennials to engage with the report when they weren’t overtly aware of Sage as a brand, as well as cutting through the noise currently around millennials to highlight how they are more than just an age group, in an innovative way. There also needed to be a focus on super-fast growth businesses to align Sage with innovation, speed and modern thinking.

By using research to uncover five dominant personas among millennial entrepreneurs, we were able to target these groups in a tailored, personalised and innovative way. To amplify these personas, we produced hologram videos, which were seeded to journalists the day prior to launch. These holograms were accessible through an iPhone using a Perspex pyramid.

The WWM report helped us in ways far beyond what we initially anticipated. The launch was timed with the development of our first accounting bot, Pegg, aimed at the millennial market – this product challenged us in ways like never before. Product development teams had to bring the concept of the world’s first accounting bot to market in a matter of weeks. Our colleagues know now what we are capable of as a business in terms of innovation – we challenge and lead, not follow.

It opened up opportunities for us to engage with new business, networking groups and global media outlets about new and innovative topics, such as bots and AI.