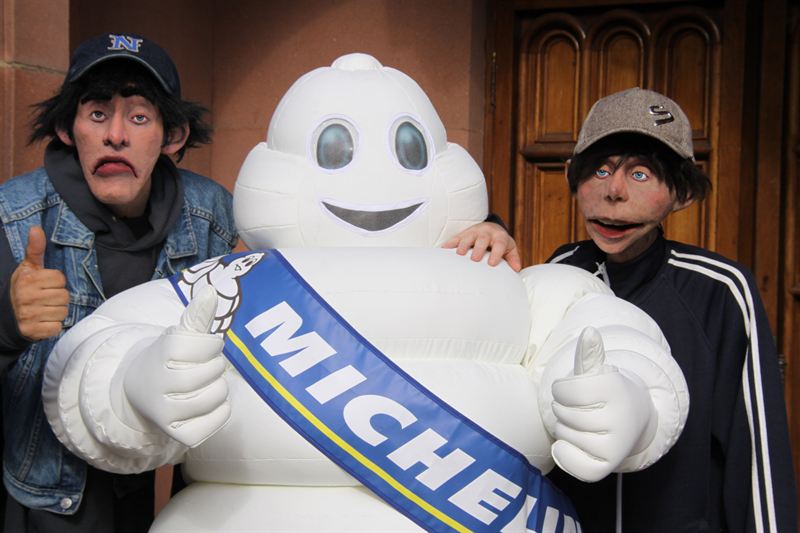 Michelin is working hard to educate the next generation of drivers about the importance of road safety.

In order to target young drivers, Michelin has teamed with regional partners and a professional puppeteer to roll out a programme of edgy puppet shows and software demos in schools and colleges to teach young people about the dangers of the road. These were initially performed around the Company’s head office in Stoke, but are now nationwide.

The young driver community is more at risk on the roads than any other age group, with one in three drivers who die under 25 (DSA.)

Years 11, 12 & 13 were mesmerized by an award-winning road-safety and driving awareness workshop by Steve Wright of the Puppet Broadcasting Company, sponsored by Michelin Tyres plc.

Initially sceptical when Steve produced a sock puppet at the start of his hour-long show, the 15-18 year old students were soon laughing and fully captivated by the master puppeteer “from up North” who delivered a highly entertaining, fact-filled production.  There was a roar of disbelief when Steve introduced the real stars of the show, his life-sized puppets ‘Bez, Flik, Shifty and Saggy! Students learnt sobering facts about the high rates of road accidents and deaths for young people in the 17-34 age range.

The dangers of texting and wearing headphones whilst crossing the road were highlighted as a major cause of  road accidents as many young people are so engrossed in their music and mobiles they simply don’t follow the basic rule of looking to see if it’s safe before they cross the road.  Students also learnt about the financial costs involved if they have an accident and of course, the potential for the tragic loss of a young life through reckless driving.

At a time when many of the students are either driving or thinking of starting to learn, they watched a series of short road safety films featuring the puppets, about responsible driving and how to have the courage to speak out if they are a passenger in a car, or knows someone, who drives irresponsibly.

The workshop ended with girls v. boys road safety quiz and a special guest appearance from The Michelin Man!

Carmen Patel, Head of Year 11 said:  “Year 11 students had many pre-conceived ideas about what the presentation would include on the topic Road Safety. When they had experienced 5 minutes from the presenter, these ideas were smashed based on his use of language, his rapport with the age group, a sense of humour, the pace and rigour of the ideas and activities.  He had the year 11 students involved, animated, interested and focussed on the serious topic of Driving Safely , making life changing decisions and being informed.  It was a truly inspirational, personal and topical session for our 15 / 18 year old students.”

After the performance, one tutor from Royal Wootton Bassett Academy said: “The pupils could really relate to the characters in the films and particularly the puppets, which brought a sense of humour to the presentation.”

Michelin believes that the private sector has a duty to get more involved in education around road safety, which must reach young people in an innovative way. Life-size puppets may not be the first thing that springs to mind when considering engaging with teenagers, but the show incorporates humour, videos and shock tactics to really bring the dangers of the road to life in an edgy and memorable way.

In addition to the show, Michelin has partnered with A2OM to roll out DriveiQ software in schools, to educate young drivers about the dangers of the roads through online scenarios.

Michelin is much more than just a tyre manufacturer – it puts issues such as road safety at the heart of the Company’s CSR, or PRM (Performance and Responsibility Michelin) strategy. Michelin has worked to strengthen the work of the public sector to educate young people about the dangers of the road, in turn aligning itself with the issue of road safety, unlike many other automotive companies who are closely associated with speed or racing for example. Michelin has also successfully created a link with tyres, as the only contact point with the road, and safety to an audience of thousands.

Building awareness of the initiative has been difficult; Michelin has had great success with the scheme around the Stoke area, thanks to its partnership with the Staffordshire Safer Roads Partnership (SSRP). However, the tyre manufacturer is very keen to partner with other organisations to roll it out across the UK: road safety is after all a nationwide issue and the campaign deserves nationwide reach. Without additional support, limited budgets mean that the initiative simply cannot be rolled out to all corners of the country, hence the focus on the local communities in which Michelin operates.