My Inspiration is My Future

My Inspiration is My Future

Women in Turkey are highly disadvantaged and face many challenges when it comes to their working lives. Some of the reasons that prevent women from achieving financial independence include child marriages, a lower literacy rate and difficulties in receiving an education. The female labour force participation rate in Turkey is just 30%, compared with a rate of 70% for males. Women are willing to work but job opportunities are limited. JTI Turkey launched the “My Inspiration is My Future” program in order to change this situation and to try to make as great a difference as possible to women’s lives. The key challenges were:

JTI Turkey played a leading role in the realization of the program, including:

JTI Turkey has collaborated with important associations and public authorities in supporting the program through the provision of opportunities and specialized training sessions.

Turkish Ministry of Science, Industry & Technology (KOSGEB – Small & Medium-Sized Enterprises Development Organization): KOSGEB provides access to support and incentive programs for SMEs and has special programs and affirmative actions for female entrepreneurs. KOSGEB offers entrepreneurship certificates and financial incentives to the participants to enable them to set up their own businesses.

Inclusive Growth Association: The Inclusive Growth Association is responsible for the coordination of the stakeholders and the implementation of the program. It also provides origami courses to the participants. The training sessions start with an origami lesson in which participants are taught how to make the shape of a crane. The crane is the symbol of the My Inspiration is My Future Program, representing freedom and a woman’s ability to fly on her own wings.

The program was announced via different channels, such as flyers and posters, in the target cities. It also used social media networks, such as Facebook and Twitter, and the local media.

Thanks to the support and announcements of local branches of Chambers of Commerce, Commodity Exchanges, and institutions of the Turkish Ministry of Science, Industry &Technology as well as various women’s associations, the program was able to reach out to large audiences and raise awareness in the target cities.

Applications are made via the website www.fikrimgelecegim.com. The target audience comprise those who are computer/internet literate or are at least willing to learn.

The online application forms are evaluated and suitable candidates are invited for interviews. At the end of this assessment process, 30 women from each city were selected to join the program. The JTI Turkey Team has participated in all of the interviews.

The training sessions are held in the classrooms of chambers of commerce and industry in the cities concerned. Each participant receives 85 hours of training in 4 different modules spread over 12 days:

Izmir has the highest rate of unemployment of all three of the largest cities in Turkey. But the female labour force participation rate in Izmir is 40%, which is higher than the average in Turkey. Briefly, there is a demand for work in Izmir but job opportunities are limited. In April 2015, following the announcement and application stages of the project, a total of 68 candidates were selected. Interviews were held on 6 May 2015 and 30 prospective entrepreneurs were chosen to join the training program at the İzmir Commodity Exchange between 11 May and 27 May. After the training sessions, the participants were presented with a certificate by the Ministry of Science, Industry and Technology at a ceremony held on 27 June, which was followed by an Angel Investment Seminar:

Rising immigration and limited business opportunities meant that Gaziantep was selected as the second city for the program.

– A total of 58 of the applicants were selected for interviews on 29 May 2015. 30 candidates subsequently participated in the training program from 1 June to 12 June.

– The participants were presented with a certificate on 15 December 2015.

Kastamonu was selected for the program because income levels are low and there are limited labour opportunities for women.

– 52 candidates were interviewed and 30 candidates joined the training activities between 19 October and 4 November 2015.

– The participants were presented with their certificates on 21 January 2016.

KOSGEB met the participants at the end of the training sessions to provide them with detailed information about its support programs.

How the program benefits the participants:

In 2011 all 90 women successfully completed the training and were awarded certificates from Bogazici University and KOSGEB. 11 of them have subsequently established their own businesses:

What one of the participants said: “I would not have been able to do what I have done without the support I have received. It has inspired me and given me the courage to start out on my own. As a result, I think I have set a good example for other women around me and some of my friends have now started to establish their own entrepreneurial projects.”

Women who have not yet started up a business also report that the program has made a positive contribution to their lives. Some participants stated that they are now more self-confident about their economic independence and are more willing to establish their own businesses.

In cooperation with local NGOs, the participants have the opportunity to communicate with local business women and entrepreneurs. Especially in Izmir, the candidates were invited to women’s forums and working groups by the relevant NGOs. JTI Turkey also shared the contact details of the candidates who had set up their own business in cooperation with an association, enabling the communications directors of the largest companies to set up monthly meetings in Izmir to provide their support for such female entrepreneurs:

The program was covered by 48 national and local media outlets.

The program also resulted in the participants forming an ecosystem. In this context, two alumni of the program — Defne Cookies and Puachic Cake – made specially designed cakes for JTI Turkey’s Istanbul and Izmir offices. This enabled JTI Turkey to encourage its employees to be part of the project. It also created new opportunities for the alumni as the employees who liked their products became loyal customers. In addition, JTI Turkey supported another alumna — Şirin Uz — by ordering cloth bags from her as New Year’s gifts for all of the women who had successfully completed the “My Inspiration is My Future” program. JTI Turkey continues to support these women in a sustainable way. JTI Turkey ordered special cloth bags from an alumna on the occasion of World Environment Day on 5 June 2016. The JTI Izmir factory remains in contact with these women when meeting the needs of the factory for items such as benches, settles etc. For example, when JTI Turkey’s İzmir factory needed seating groups, it purchased them from the company established by one of these female entrepreneurs.

A Q&A section has been added to www.fikrimgelecegim.com, where female entrepreneurs can ask questions about finance, the law, communications, sales and information technology. The questions are answered by volunteers employed in the relevant departments at JTI Turkey.

The program has enabled JTI Turkey to further encourage its employees to engage in voluntary work. The most important outcome of the program is that JTI Turkey’s employees are proud of being a part of such a great social responsibility program. This has been particularly helpful in increasing awareness amongst JTI Turkey’s own female employees about the importance of encouraging the businesswomen of tomorrow.

The program attracted the attention of JTI International. The project was  incorporated into the JTI International Sustainability Report as a model practice to follow.
http://www.jti.com/files/6514/6469/4924/CSR_2015_INTERACTIVE_27052016_2.pdf
(On Page 25 )
At the Turkish Chambers and Commodity Exchanges’ Female Entrepreneurs Commission Summit, the project was selected as one of the 6 best programs to be implemented in Turkey.
http://www.tobb.org.tr/Sayfalar/Detay.php?rid=6713&lst=Haberler 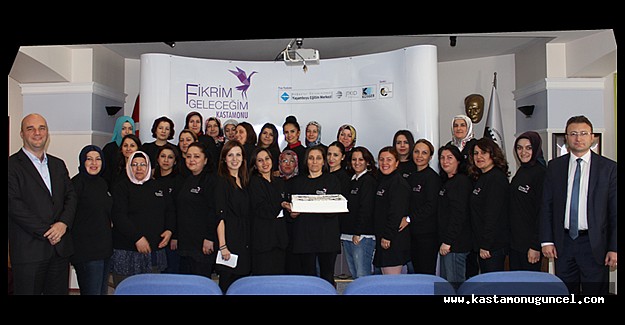 To date, there have been many initiatives about the empowerment of women in Turkey but only a few have succeeded in becoming sustainable. The most important reason for this is that these projects did not include a follow-up phase after the completion of their initial program. My Inspiration is My Future Program has overcome this problem not only by providing further support through additional training activities but also by maintaining continuous communications with the women in order to monitor their personal development. JTI Turkey organizes motivational and angel investment seminars after the training programs and supports the women by purchasing products from them in accordance with company and factory-related needs.

The sustainability component of the program distinguishes it from any other program and means that it can be implemented in various cities across Turkey, thus creating many more success stories.

As part of JTI’s efforts to support equal opportunities, JTI Turkey started this program for creating an impact and value to society.
The most compelling part of implementing the program was to reach for disadvantaged women and convince them to become a part of the program because of their situation and problems they have been facing. With the support of local branches of Chambers of Commerce, Commodity Exchanges, and institutions of the Turkish Ministry of Science, Industry &Technology as well as various women’s associations, the process was successfully completed. After the trainings, women were happy to get an entrepreneurship certificate from KOGEB and education certificate from the most prestigious university in Turkey, Bogazici, these are the most precious advantage of rest of their life.
The “My Inspiration is My Future” program, which has just completed its first year, is a practical program that can be adapted by other countries facing the problem of a low female labour participation rate. The training activities are organized not just for the specific needs of the program in Turkey but in a way that they can be adapted to all of JTI’s locations all over the world.

Starting in 2016, the program has been expanded to include other cities such as Adana, Canakkale and Konya. For 2017, the designated target cities will be Samsun, Mersin and Erzurum. We will be hearing about more success stories all over Turkey and JTI Turkey will continue to change women’s lives for the better.