Based on the accepted core values of modesty, respect and proximity to people, the Sabancı Group regards basing all corporate conduct on the awareness of social responsibility as an unchangeable core component of its management approach. Gender inequality is one of our strategic working areas in this context. In 2015, in an effort to extend the scope of the philanthropic works of Sabanci Holding, create synergy among employees, and use the qualified workforce more efficiently for the society they live in, Sabancı Volunteers social responsibility programme is initiated which is the largest corporate volunteering programme of Turkey.

Sabancı Holding is Turkey’s leading industrial and financial conglomerate, active in sectors that include financial services, energy, cement, retail and industrials. The Sabanci Holding, one of the top largest multi-business company, has been at the forefront of the gender equality movement in Turkey, not only for the company itself but also for Turkey. In the Holding, the rate of women employees is 38,5% among white collar workers which is above Turkey average rates. The rate women in managerial positions in the Holding are 15%. In 2015, 52% of women employees have been promoted.

Sabancı Volunteers Programme, coordinated by corporate communications directorate of Sabancı Holding, is a philanthropic effort of the Group to encourage employees to contribute to the society they live in. The headquarter and main operation area of Sabanci Holding is in Turkey but also Sabancı Group companies currently operate in 16 countries and market their products in regions across Europe, the Middle East, Asia, North Africa, North and South America. Thus, the programme covers all Sabanci employees in these countries.

By creating Sabancı Volunteers Programme, the aim was extending the scope of the philanthropic works of Sabanci Foundation, and engaging Sabanci employees to social responsibility activities more.

The first year of the programme consisted of 2 phases:

As the first 3 years’ focus is on “women”, online trainings consisted of five modules on “Concepts and definitions on gender inequality”, “Education and Gender”, “Business and Gender”, “Violence against Women”, and “Early and Forced Marriage.”

8 trainings on civil society, project cycle management and volunteering were given to volunteers to become the team leaders and were then asked to form teams in their own cities and workplaces. By the end of the first year, the program reached an employee of nearly 350 volunteers to run 45 women-centred projects in 11 different cities.

Moreover, the project pool that hosts the projects enables synergy and the possibility to spread the successful projects to an extended geography. In 9 years, the program aims to create a community of 45,000 Sabancı Volunteers that actively create permanent values in the society for the women, the youth, and the disabled people.

The programme was highly welcomed and internalized by Sabanci employees. Although, target was to reach 500 volunteers for the first year, the application process ended up with around 1.000 applications.

The details of the programme were conveyed to team leaders with 8 volunteering trainings in 4 cities in Turkey: Ankara, İstanbul, İzmir and Adana, comprising of employees working in 40 different cities. It was planned to have 7 volunteering trainings but due to high demand, an additional training session was run.

Currently, we are running 45 women-centred projects in 11 Sabancı Group companies in 11 different cities with our volunteering projects. Project teams consist of team leaders’ colleagues, family members, and suppliers of their company which increased the impact of volunteering in the society. By the help of the projects, we have supported the lives of more than 1.000 women including women in shelter, women in prison, women whose children is cancer or disabled, financially disadvantaged women, unemployed women, high school girl children, and girl children in orphanage.

There are many projects in these projects that we carry out in various fields such as employment, education, personal development, psycho-social support, health. For instance, in Enerjisa’s project  300 girls in Kahramanmaras perform various sports and chess for first time in their life. Another project team in Enerjisa has a project that aims to create a network that will give hair donations to women who have lost their hair due to chemotherapy and give psychological support to those women. Avivasa’s “Kozadan Kelebeğe” project has provided Financial Literacy Trainings to 400 disadvantaged women in Izmir, and by the end of 2016 trainings are expected to reach 1000 women. With the “If Women is a Mother” project implemented by Bimsa volunteers, they are trying to meet the needs of 20 women with low income level who recently gave birth. Kordsa Global collected donations for building kindergarten for 500 children between the ages of 0-6 living in prisons together with their mothers.
BİMSA volunteers organize activities children with cancer and their mothers with for psychological purpose with the Foundation of Hope of Children with Cancer. Within the scope of Kordsa Global’s “Women’s Club” project, they provided free health screening to their entire female employee and a woman was diagnosed with cancer at an early stage.

Such projects result in creating team spirit and synergy, which also contributes to the personal development of the employees. The successful projects also inspire other teams to implement similar projects.

On the other hand, more than 64.000 employees are expected to complete the online trainings by the end of this year. After the training has started, one of Sabanci employees sends the following message:  “I am from East of Turkey and I am 22 years old. I struggle too much in order not to marry at early age. While I am watching this training, I was about to cry as I was thinking of my friends who got married at very early age and have children”

A corporate volunteering programme is not a new concept however Sabanci Volunteers Programme is innovative in the way that it is initiated to overcome the potential challenges like:

Due to internalized social responsibility culture of the company, we did not face these challenges. Multipurpose trainings covering civil society, volunteering and project cycle management were delivered to team leaders for the projects to be proper and in line with Sabancı values.  So that, before they start, they became more aware of volunteering and its dynamics.

On the other hand, with comprehensive, appealing and to-the-point online trainings on “Concepts and definitions”, “Education and Gender”, “Business and Gender”, “Violence Against Women”, and “Early Marriage.” 60,000 Sabancı employees were included in the program. Celebrities were used in training webinars to grab employees’ attention.

The initiative is highly encouraged by the top management which resulted the employees to embrace this opportunity to be useful to the society. From the initial steps of the project our Chairman, the General Manager of Sabanci Foundation and Head of HR was involved in all planning process and gave support at the highest level. Chairman, Head of HR, General Manager of Sabanci Foundation and Corporate Communication Director were present at the press conference and gave their messages about the programme to show the importance attached to the programme. After that, Chairman and CEO encouraged employees to participate in the volunteering program in person with motivational letters. Similar letters regarding the milestones of the programme continued afterwards also. In addition, all management team, including Chairman and CEO have mentioned the importance of the programme in their statements to employees.

The Programme was also communicated internally and externally, both supporting each other. The kick- off was planned with a press conference involving all parties of the project, Chairman, HR, Sabanci Foundation and Corporate Communication. The internal messages were sent just after the press conference announcing the launch. The internal messages from top management were prepared for each- mile stone of the project including the opening of applications, beginning of trainings, The World Volunteering Day.

Also viral videos were one of the tools that show the misconceptions about gender issue and increase awareness of the project. Online platforms were created for the project including, web site and social media channels. Besides, internal online platforms and newsletter were another strong media to reach the target audience. 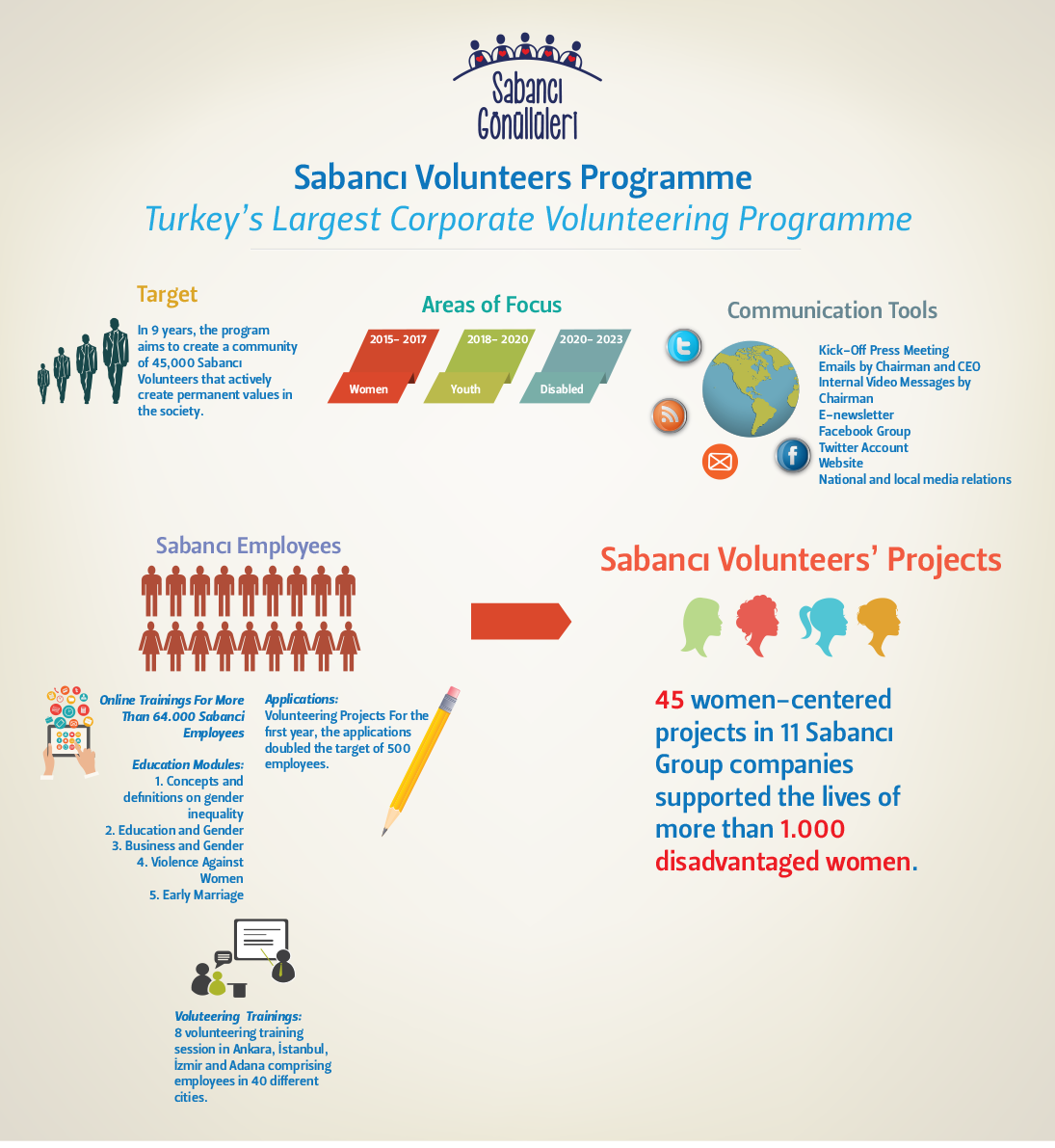 The true value we receive from any CSR projects is to see it heals an issue of the society. With Sabancı Volunteers Programme projects, we provided solutions wherever it is needed and whenever it is needed. This is because project teams among the Sabancı Volunteers are encouraged to develop local projects for the society they operate in.  Because they know better where the help is needed. They can implement effective projects to solve a local issue, they know the problems and people, and they can more easily partner with local authorities, suppliers, non-governmental organizations and involve local volunteers to implement CSR projects. Once they start to get the results they deserve, it is very satisfactory for all parties engaged.

Such projects result in creating team spirit and synergy, which also contributes to the personal development of the employees. The successful projects also inspire other teams to implement similar projects in their company or in their region, since all projects are in the projects pool and accessible by all volunteers.

In short, being solution-oriented, diverse, inclusive and continuous, we believe that Sabancı Volunteers Programme is a good example to inspire fellow professionals, leading to a more enlightened perspective to take responsibility for the society.